I cannot remember a time when I was not fascinated by wildlife – by it’s secrecy and use of camouflage.  If one doesn’t know what to look for one can pass by unaware – until a sudden explosion of movement betrays a fleeing, bounding creature, a wild animal in flight.

Later, as a sculptor, it was the “movement” that I wanted to capture in a bronze hare sculpture.

I have studied and sculpted hares for the past fifteen years or more. Have watched them whilst out riding in Sedgemoor in Somerset, occasionally in danger of being bucked off when a hare gets up right under the horse’s feet. They bound away, leaping over the ground ears laid back stretching out and folding up till their back feet pass their ears.  Each leap covering yards, capable of turning on a “sixpence”.  They swing round on one leg with no loss of speed, see “Turn Again” bronze hare sculpture.

Sometimes lolloping along, unfrightened, now and then stopping to listen, ears held high, turning this way and that to catch a fleeting sound, standing tall on hind legs to peer over the grasses for a sign of danger, crouching down to hide, invisible until the last moment and then flight.

Most magical of all one evening in spring I saw a group of hares playing, chasing, jumping, sprinting in circles and boxing.  A buck approached a doe and had his ear “cuffed” before leaping away and returning to try again.  A sudden noise sounded the alarm, the moment passed and white scuts melted in the dusk.

For any enquiries and sales please contact Jan Sweeney either by email or by telephone. 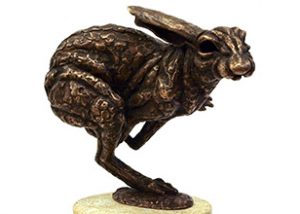 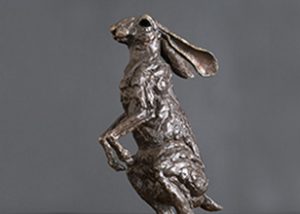 Previous12
Back to Galleries
Go to Top